First off, we have a brand new edition to the portfolio! 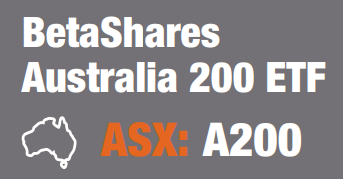 I have essentially replaced our VAS ETF with the BetahShares A200. The only major difference between the two products in terms of what they are invested in is the A200 is the top 200 (in terms of market cap) companies listed on the ASX whereas VAS is the top 300. So VAS is more diversified which is a good thing, but the reason we made the move was because of management fees.

I’ve said it time and time again, management fees are not only extremely important. But they are something I as an investor can control how much I pay to an extent. So when BetaShares offers the A200 @ 0.07% which is half the costs of VAS (0.14%)…they have my attention.

I waited a little bit in hopes that Vanguard would respond by lowering their product, because I don’t want to add another holding to my portfolio unless I really have to, but after a few months I hadn’t seen any sign of them looking to lower it, so I pulled the trigger on the A200.

I not only benefit from investing in this ETF, I also want to reward BetaShares with my business after they have produced the lowest Australian index ETF in history! Moves like this create competition amongst the providers and are good for us as investors moving forward. We might think that our current ETFs and LICs have pretty low management fees. But in reality, the US market offers much more options with lower fees.

You might not think there’s much difference in paying 0.14% compared to 0.04% but it does add up over time with a decent sized portfolio.

The second announcement is the new segment I have created called ‘Ask Firebug Fridays‘. It’s a collection of Q&A’s from readers who have submitted their questions via the contact page. It’s something I should have created ages ago. I was spending so many hours responding to readers questions and was often answering the same questions over and over again, which reminds me that I need to create a FAQs about FIRE one day.

There would be days where I would sit down to pump out an article but never even got started because I spent an entire day responding to emails/comments/tweets. At least with #AFF, I can create more content for you guys to read/listen to every Friday to inspire you with FIRE related content 😊.

And last but not least, I have been sponsored by two awesome companies! SelfWealth and Relentless Hosting are now helping out with the costs of running this blog and I couldn’t be any happier that this little passion project I started over 3 years ago is starting to pull it’s own weight and earning me some money. Now if we were to judge this as an investment it would be…ah… how would I put it… horrendous.

At a very rough guess, I’d say I would have put in over 1,000 hours into this website with $0 financial gain and honestly, I never started this site with the goal to monetize it. I wanted an Australian FIRE community that I could discuss strategies and techniques with. And back in 2015, there were 0 Aussie FIRE sites that I could find, so I decided to make my own and it’s been one of the best decision I’ve made to date.

I’m not sure how the sponsorships will go, but if I can continue to push a decent amount of traffic, it could be the start of a great partnership.

The markets were jumping in August! Over $4K for both the ETFs and Super.

I was holding a little bit too much cash and finally pulled the trigger on A200 with a $10K trade. Down a little on cash due to an expensive month (new car tyres 😤).

Closing in on the half a Mil…Will we get there by the end of the year…🤔? I’m gunning for it 😈 It has had a total annualized return of 26.16% (or $14K of gains) since I first bought it in 2016 and has been my best performer by a mile. I almost want to sell it to lock in those gainz because surely it can’t go much higher. And if you look at the incredible bull run of the US…surely it’s gotta come down at a certain point. But timing the market is a suckers game so I will sit for now. If Australia tanks and the US didn’t, it would be tempting to sell VTS and clean up cheap Oz shares. But we’ll see.