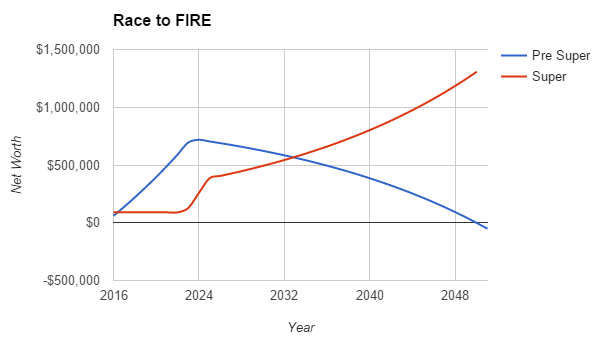 There are countless sites/articles/forums about financial independence (FI) on the world wide web. I’ve often come across really clever, well developed calculators that offer a really good visualisation on how long you have to go before you reach FI. But the longer I searched for the best calculator the longer I realised that they were all geared towards other countries.

One of the main reasons I created this site was to offer my fellow countrymen quality information that was tailored for an Australian audience.

The biggest issue I had with every single one of these FIRE calculators out there was they didn’t factor in our Super system. The US system, which is the main system upon which I found almost all of the calculators accounted for, has a fundamentally different way their citizens can withdraw from their retirement accounts.

To put it simply, in the US you only need one portfolio to be at a certain amount before you are considered FI. But because you can’t access your Super before your preservation age (99% of the time) you end up with two. Your Super portfolio and a portfolio outside of it.

So what’s one to do? Do I just keep plugging away at my personal portfolio until I reach my FI number? That seems like a waste since Super has such a big tax advantage. You’re not likely to beat the 15% tax breaks on your Super.

But I don’t want to put money into Super because I want to retire young! And I won’t be able to touch the money until my preservation age (60 for me).

The above are two screen shots from the calculator showing the basic settings and the graph that it generates.

In a nutshell, the most optimal way to reach FIRE here in Australia is to: 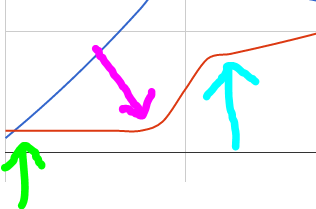 Video Of The Calculator In Action

The calculator has some flaws. It’s a work in progress. If you find a flaw please let me know and I’ll try to fix it.

Enter your email address and not only will I send you the calculator. I will send you updated revisions of it ever time I fix a bug or the laws in Australia change.