It’s that time of the year again. But now with the combined powers of Miss Lady Bug on board, we did managed to save a bit of money in November.

And in even bigger news.

This guy was elected as the leader of the free world Does anyone else follow US politics? I was GLUED to the updates when it was all going down in America. It was honestly more exciting than most action movies.

The entire election has played out like a movie script. You have this guy that NO ONE is taking seriously and considered a joke by the entire world. His popularity keeps building and building but still no one honestly considers him an actual chance. He wins the Republicans nomination and everyone laughs at them for picking a candidate with 0% chance of being elected.

The entire campaign is a circus with Donald Trump saying the most ludicrous things that would instantly end any other running campaign in history. He says his going to build a wall and get Mexico to pay for it?!

And then he gets even more popular!

And talk about twist and turns all the way to the end.

Hilary with the whole email case that gets reopened A WEEK BEFORE ELECTION DAY.

And of course the fall out was just as interesting. There I was going around the office telling everyone that The Donald is now the leader of the free world. Their reactions were priceless. Some were nearly brought to tears (calm your farm people) and the anti politically correct were seen celebrating…and some couldn’t care less. I was keeping a close eye on the stock market because I knew that historically it usually dips when a controversial president is elected. And now that I have investments in the stock market through ETFs, this is of great interest to me.

All the experts were saying that the Dow Jones (basically the US Market) would dive if by some miracle Donald Trump was elected.

So what does any astute investor do if they know there could be a crash? Wait on the sidelines with money of course.

I had about $5K to put in anyway so it wasn’t like I was varying too much from the original strategy. But I wanted to see what would happen.

And sure enough, when Donald Trump was confirmed to be the president elect, the US market or more specifically ASX:VTS (Vanguards ETF for the US market) dived around 10 points from memory.

I had to wait until 10AM for the market to open so I could buy in and as soon as the market opened, VTS had already shoot up 5 points! I bought anyway and since then I have made around $600 bucks and it continues to rise! 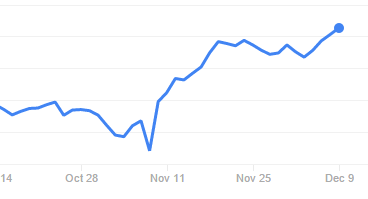 So it just goes to show that 99% of ‘experts’ out there cannot predict the market swings correctly. They all said the index would go down. And although it dipped, it shot straight back up and has continued to be up since. It just strengthens the strategy of investing periodically and not to try and time the market. Even my little ‘win’ is extremely irreverent in the long…but I can’t help it ?

Weddings and Christmas took up majority of expenses this month.

Fingers crossed I can get through December relatively unscathed.

PS. I have updated all the graphs and pie charts. The are interactive now so hover (or touch if on a smartphone/tablet) over them to get more info.

No change in the property values this month