I don’t even know where to begin with this months update. So much has happened that it feels like it’s been a lifetime since I’ve logged in to give you all an update on our journey.

I guess I’ll just go in chronological order but I may have a few sidebars here and there.

We were still in Vietnam at the start of March and I pretty much covered all the things we did there in our Feb update… I don’t think there’s anything noteworthy on the last few days.

Oh, one thing I will mention is that we couldn’t really shop anywhere in SE Asia because we were backpacking and didn’t have any checked luggage. This is a much more convenient way to travel around but you sometimes see some killer deals and want to buy stuff but can’t. We had already well and truly maxed out our 7kg carry on limit multiple times when boarding (most of the time getting away with extra weight).

So anyway, because our last stop was in Hanoi and the next two flights (Dubai and London) included checked luggage for both of us, this meant that we could buy a suitcase and do a big shop before we eventually ended up at our new home in cold old England!

We ended up with this haul after one shop at the night markets costing a total of $400 AUD! The best buys from everything had to be our ‘North Fake’ jackets! They are so incredibly warm and if you look really close you will see the logo is slightly suss but honestly you can’t even tell. We have been wearing them almost daily now in cold AF London and they have been the best! No signs of dodgy materials… yet. I was also really happy with the fake Daniel Wellington watch, looks great and cost around $10 AUD.

We then packed our bags and finished our SE Asai adventure and boarded a flight to Dubai which was a nice in-between stop on the way to England but was a place I had really wanted to see for a while too. 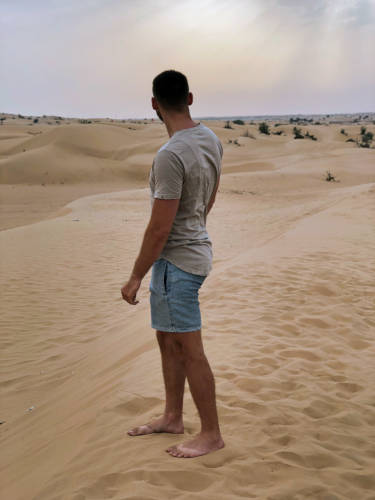 A two-story aquarium in the mall

What can I say about Dubai… it was a big shock paying western prices again after we got so used to SE Asia, especially the cost of alcohol!

Dubai definitely lived up to the hype in terms of big is better and a lot of flash and bling everywhere. Each time I looked around at the buildings it was as if every single architect was trying to outdo each other. Many of the 100+ buildings we saw would have probably been world famous if it had been built in Melbourne just because they were so nice looking and unique. But over there it’s just another skyscraper. Everything is so new and luxurious it’s crazy!

I finally met up with someone who reads the blog in Dubai too which was extremely cool! This person reached out to me months ago through my contact me page and I can’t remember the exact details but they mentioned they lived in Dubai and if I was ever traveling through I should shout out. 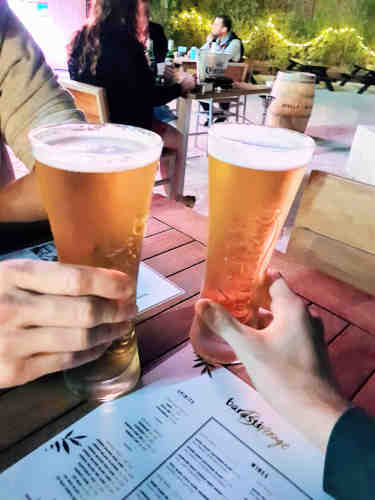 We also went out for dinner with our partners and it was a lot of fun to finally chat with other people from the FIRE community in person. And you couldn’t mention Dubai without bringing up the Burj Khalifa AKA the world tallest building. 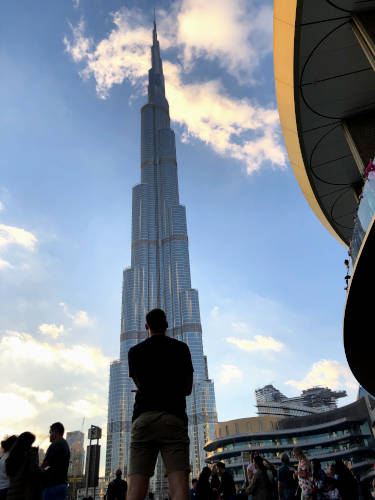 Photos do not do this engineering feat justice! It’s simply incredible to look at something so insanely tall and realise it was built by humans. We have come a long way from the cave!

We were only in Dubai for a few nights before jetting off to London which took roughly 8 hours.

It’s been an absolute whirlwind since landing in London. I really wanted to prioritise finding a job ASAP and not sightseeing straight away. There’s only so much holidaying I can enjoy before itching to get back to work and have some income rolling in again. It does help that I’m getting long service leave until June but still.

Mrs. FB teaching gig is super easy and the pathway for teachers from Australia to London is well established and very mature. They even have a bloody app where you just tick on you’re available and you’ll have school contact you. Super easy!

So she was working within the second week we got there which was very easy. My work, however, was a little bit more unknown.

I wanted to see if I could get into contracting in London. I had always seen that there was plenty of money to be made in Melbourne, but that of course came with a much higher cost of living so I never really entertained that idea. But since I was moving to one of the worlds biggest and most popular cities I thought I’d investigate a bit more. Contracting usually offers a very competitive day rate and is perfect for a travelers lifestyle. You get paid well for short periods (3-6 months) and then you need to find more work. This could give us some flexibility and allow time for traveling Europe.

I updated the resume and started applying for contracts. The first week was a bit disheartening because I hardly had any responses and wasn’t even sure if I was experienced enough to be applying for these lucrative contracts. But I was determined to land one of these jobs and continue doing my research.

My luck turned around in my second week when I found a fanatic website that was made for IT contractors in the UK. I was doing so many things wrong and the forum there helped immensely.

I also ended up connecting with another reader on the blog who was already a contractor here in London. It was great to chat to an Aussie who has made the move over here and had successfully secured a contract and also just happened to be apart of the FIRE community. We chatted over a beer of course. 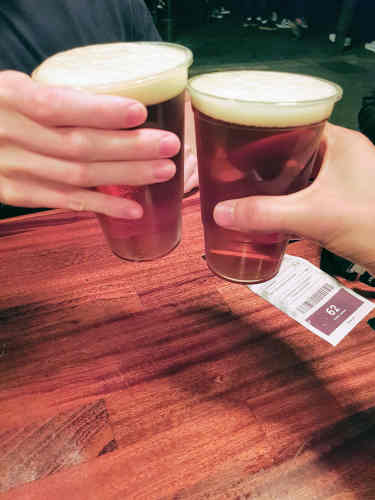 Another beer with an Aussie Firebug reader in London

I changed my resume around and created my own limited company as an IT consultant which costs around £1,000 all up (with all the insurance and everything). It was a bit of a gamble but it’s what’s needed if you want to land the job.

There’s also an extremely big tax advantage for limited companies as opposed to PAYG which I’ll probably go over in another post. The dividend system is completely different over here and the UK pay way less tax in general than Australia which I am constantly reminded is one of the highest taxed countries in the world.

The other big piece to the puzzle was finding a place to live. I had dreaded spending days on end looking at apartments and rooms only to be disappointed. I knew this part of our trip was going to be hard. The rent is so much and you get so little but it’s the price you pay to live in London I guess.

Fortunately, we got extremely lucky and found a place that was perfect in just the second go! Right near the train station, 25 minutes out of the CBD, cool places all around, reasonable rent (£900/m), came with an ensuite which Mrs. FB had said long ago was a non-negotiable and most importantly… came with great housemates who we have been living with now for 3 weeks.

The rent of £900/m is a tough pill to swallow and was right at the max of what we were going to pay. But the place is brand new (we’re legitimately the first to live here) and it’s a killer area so it makes it easier… it’s still more than double of what we were paying back home though 😢

Setting everything up here in London has been exhausting. Just navigating around, finding a gym, working out the trains, setting up a bank account and all that takes time and energy. After nearly 4 weeks I only now just feel like we’re getting settled and back into a routine.

Traveling takes a toll on your health (for me anyway) but you gain some much valuable experiences from it. I’m honestly loving getting back into the routine of work (ironic for this blog), gym, eating healthy and a normal sleep schedule.

I have also got my computer setup finally so I can get back to releasing content on a more consistent basis.

That’s all the major things that have happened for us over the last month. Time to take it a bit easier now and see if we can start sending some £££ back home to continue our investment goals! The next overseas trip is a few more months away, but we have plenty to explore here in England first that’s for sure.

It wasn’t a lot, but we escape March in the black up $3K!

The sources of income that saved us from an incredibly expensive month were my long service leave still generating $1,600 a fortnight, share returns (including some nice dividends 🤑), money made through the blog via affiliates and Mrs. FB getting paid for her teaching gig in London.

We spent a lot last month though. It’s amazing how much it cost when you move into a new place. London has Gumtree thankfully but there are still so many things you need and it all adds up. Combine that with all the costs of traveling around (buses, trains, Ubers) and it’s actually a miracle we came out ahead for March.

Most of the big stuff is out of the way now and hopefully, I can start to get the big consultant checks for the next 3 months which will help immensely. I’ve signed up with Transferwise and plan to send surplus £££ over to my Aussie account so we can continue to invest in shares whilst overseas. I’ll report on how that goes in next months update. We added $16.5K worth of A200 shares last month to the portfolio. MLT and AFI were at a discount if I remember correctly but I’m starting to become hesitant about the shifting laws in franking credits and just felt more comfortable going with the vanilla ETF index this month. I still haven’t made up my mind about what will happen if the franking credit refund gets axed.

All positives from last month expect for AFI. VAS had some juicy dividends for us while A200 wasn’t too shabby either.

I have seen a lot of talk online about A200’s dividends being lower than VAS and some investor have used this as a reason not to invest in A200 vs VAS. There is a perfectly good reason for A200 to have lower dividends initially vs VAS and that reason is that it’s a new fund! But it doesn’t mean that it will have lower returns. It will just have higher CG vs dividends in its first couple of years which if you ask me is perfect for people in the accumulation phase. After the fund grows to a decent size you will see the dividend yield be almost identical to VAS (slightly different because of A200 vs A300).