Mrs. FB and I were well and truly in ‘The Grind’ for roughly the last 4 years back home. We had holidays every year and plenty of social events but the routine of work, gym, nightly wind down (book/Game of Thrones/Youtube) from Mon-Fri was pretty much the same for a very long time.

When you get stuck in ‘The Grind’ it seems like days melt into weeks, weeks dissolve into months and before you know it, a year has passed without you even blinking!

When you’re out of the grind and exploring around through … it feels like you get to see and experience more in a month than you might in a year!

I have been contracting as a consultant for over a month now and the dynamics of the workplace have been extremely interesting to witness. Without naming names, I have landed a contract with a multinational corporation within the heart of London. I had come across the ‘corporate elite’ back home but it feels like it’s ramped up over here. Where you work and what position you have is very important in some groups. And the cost of living is so high that a lot of people who have relatively high paying jobs can’t afford much. A lot of it has to do with ‘Keeping up with Jones’, where you live, why do you have roommates? Can’t you afford a place yourself, bars you go to etc. etc.

I will say this though, the Brits know how to drink! It has been really fun working a new job and getting to know a new team.

I have been working a few days a week outside of London at the client’s site which has been a bit of a hassle but my employer pays for all transport, food and accommodation which helps. When we’re out at the client’s site, all dinners are paid for on the corporate card. Now I’ve been a public servant for the last 7 years so you could imagine my shock when they started to order alcohol 😱.

I can definitely see the appeal for working these consulting jobs though. It’s almost like a trap. Basically, everything is paid for, the money is great and you get to travel internationally if you want.

But there is a secret tax which is paid without you noticing if you’re not careful. And that is the impact these jobs have on your health and relationships. It’s so incredibly easier to eat bad and drink wine every night because one, you’re not paying for it, and two, it’s what everyone does and you don’t want to be the only one not going out with the group. And the time away from home sucks!

But I tell ya what, if you’re young without a partner/family (or if your partner is willing to relocate), this type of work can be amazing!

I’m going to try to stay in London 5 days a week for my next contract and we’re only here for a short period of time (relatively) so it’s not quite the same… part of me wants to get back to ‘The Grind’ but the new experiences have been cool so far!

Speaking of new experiences. We attending our first Rugby match in April. We also made our way down to Brighton for the long weekend and was blessed with amazing 22c weather 😂. But for real, the weather was actually good and my goodness does everyone get up and about for it. Volleyball, beach ping pong, skating down the boulevard, sunbaking, beach bars were absolutely packed!

When the sun is shining, everyone is up for a good time and the vibe was amazing.

Although I had to laugh that they called this a ‘beach’ We are trying to stick to one country per month and somewhere in the UK too with the other two weeks off just to recharge.

Our first Euro trip was catching the Euro Star to the land of chocolate, waffles and beer… Belgium!

Even though the UK is apart of Europe… it’s not really Euro in most peoples eyes. I definitely noticed a more European vibe when we arrived in Belgium. 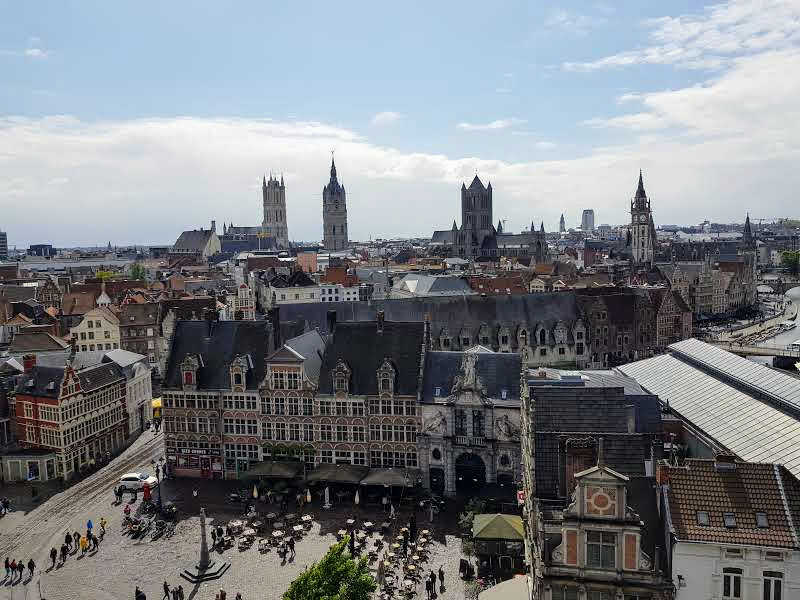 The best waffle I’ve ever had! The cobblestone streets are just incredible. Also, I know there’s plenty of them but my God the elaborateness of the churches and the town centre is out of control.

Just staring at the detail of the craftsmanship on these buildings is mind-blowing. 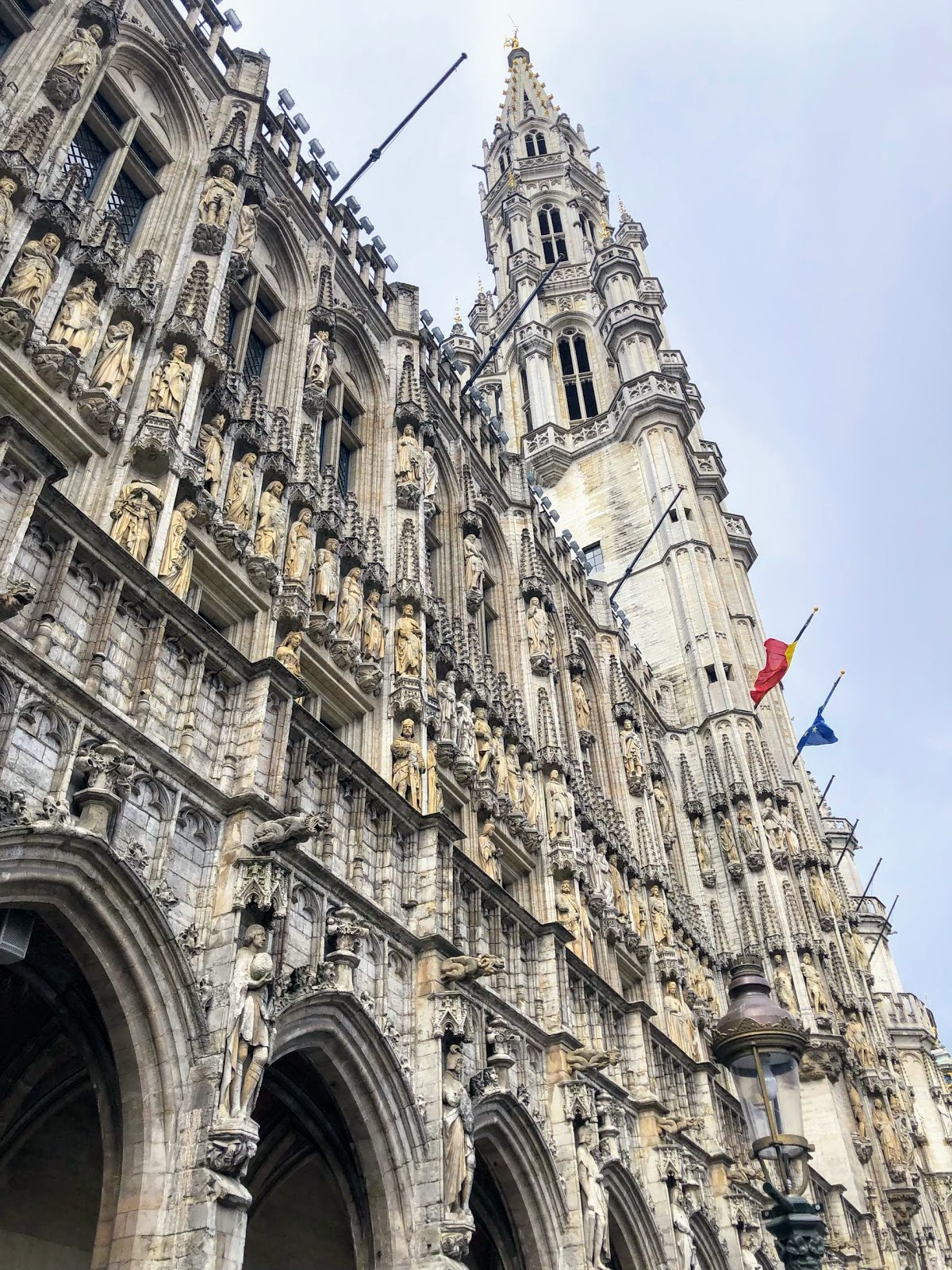 This one must have had over 1,000 individually crafted statues that were nearly the size of an adult (seriously, click on it and zoom in). Can you imagine how much work went into those statues… and there’s over a 1,000 😱

There will never be buildings built like this again because most of today’s buildings are built for profit or are built with taxpayers dollars. Everything about these structures is over the top and not efficient but gee whizz they look cool.

The waffles, beer and chocolate lived up to the high standard I was expecting so no complaints there!

It wasn’t much but we keep progressing with the net worth in April moving the needle by about $4K in the right direction. The big change, however, is the weightings of our overall net worth have changed significantly.

I refinanced (again) to a new lender (Macquarie) who has given us a really good rate of 3.90% for both the investment loans with an offset. But unfortunately, they wanted a lower LVR to complete the deal and so I had to throw in about $30K extra to add to the loans. I really didn’t want to have to do this but the rate was really good and I was looking at finishing things up with CBA anyway.

They also required the loan to be P&I, not IO. So whilst I don’t really want to pay down the IP’s loans, the rate difference is past the tipping point and it’s more attractive for us to get the cheaper rate vs staying IO (good job APRA).

As a result, you will notice that the pie chart for our net worth has added $30K to real estate equity and our cash holdings have dropped by the same amount.

It’s what happens when the real estate market is going through a downturn. Even though our properties are in Queensland, the major capitals (Melbourne and Sydney) have taken a hit and the banks are being extra cautious.

We will wait for the market to bounce back whenever the hell that is and then sell the IP’s as per the strategy. They are cash flowing nicely so no stress on that part. 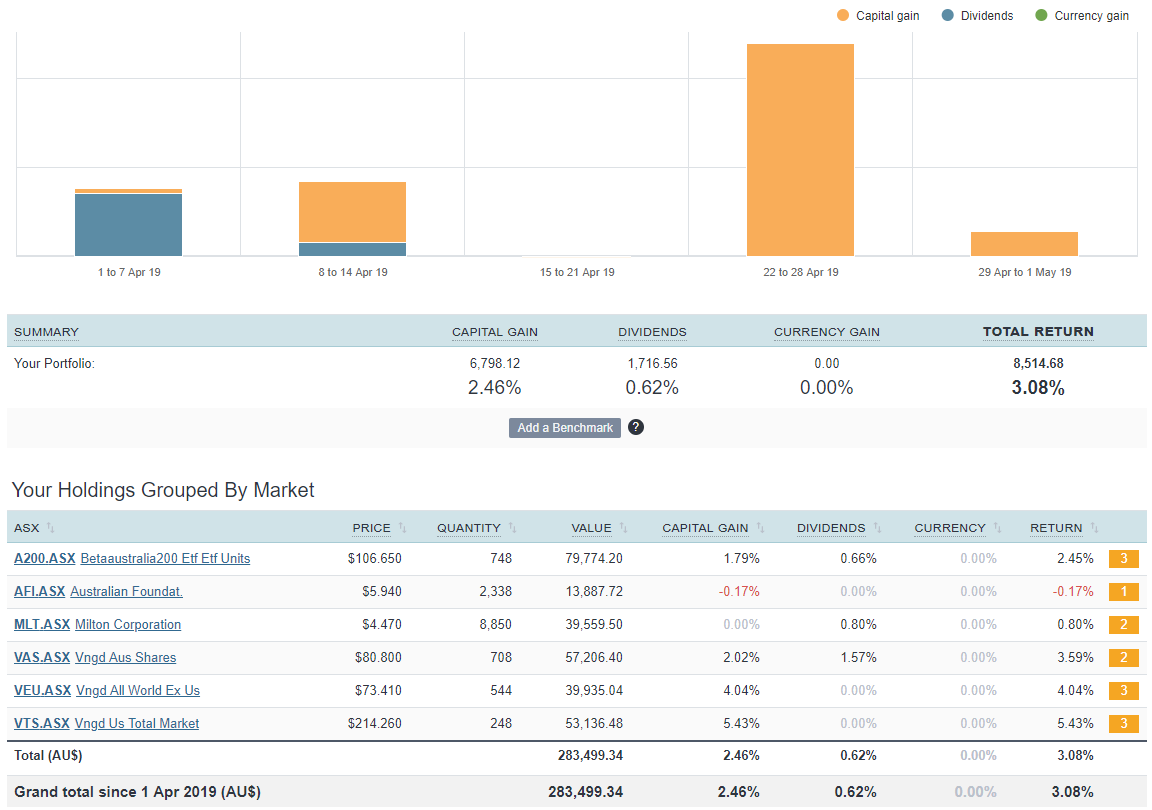 We continue our trend of pouring money into A200 in April with another $18K added.

This is diverting from Strategy 3 where we were originally planning to buy LICs if they were trading at a discount (which they are), but I just keep coming back to regulatory changes (the franking refund being axed) that would severely impact this strategy. I’m a big believer in not speculating potential future changes but I just feel more comfortable buying the vanilla index.

There’s plenty of ways around what’s being proposed but for my sleep at night factor, the A200 just sits better.