Was nice to slow down and smell the roses as they say. And I did enjoy most of April but I felt the last week or so has been a bit of a drag.

Mrs. FB and I have been doing some pretty epic rides on weekends as our daily activity. We’ve been riding through London CBD on the old pushys and I think it’s a once in a lifetime experience.

Riding over London Bridge and throughout the CBD when there’s not one car to be seen or heard is surreal. The more I think about it, it’s like the perfect time for cyclist actually. If you wake up semi-early on the weekends and ride through London you can literally have the whole street to yourself and maybe a few other cyclists, but that’s it!

I’ve got heaps of videos and pics to show the kids one day. 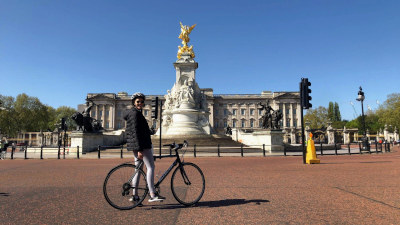 In other news, the cogs are still turning in the insurance industry thankfully and the startup I’m working for has actually been hiring people during all of this which is really reassuring. We’ve had a few people join the team during lockdown which is just bizarre. I wonder how they’re feeling not having met anyone in person.

Mrs. FB hasn’t gone back to work but is receiving furlough from her agency which roughly translates to 80% of her income. This has been a nice surprise but part of me does wonder how the hell all of these countries are going to pay for these stimulus packages in the future. Maybe there will be some sort of COVID tax for the next 30 years 🤔.

And lastly, I think we’ve exhausted just about every Netflix series out there so if anyone has any killer documentaries/series to watch I’d love to hear about it.

Most of the gains we saw came from the stock market and cold hard savings. We basically aren’t spending money on anything other than food and rent so the savings rate is off the charts.

Defying most logic, the markets roared upwards in April returning an incredible 4.4% (for our portfolio) after the monstrous drop in March. We still have a long way to go before we’re back to where we were. And there’s the possibility that we haven’t even seen the bottom yet.

I’m a true believer in index investing so I don’t let my very limited world economic understanding creep into my investment decisions but it’s hard to not look at what’s going on out there and be a bit puzzled by the gains we saw last month. Although the same could be said about the drop I guess.

Did anyone catch Warren Buffett and the Berkshire Hathaway Annual Shareholders Meeting the other day?

To paraphrase Buffett, he basically asked if anyone truly believed that the value of all companies fell by 30-50% because of this crash? You could conclude that some companies definitely would be worth less, airlines come to mind, but some might actually be benefitting from the current crisis… Amazon anyone?

What has become abundantly clear during April is the stock market is not the economy!

They are linked but are distinctly different as we’re currently seeing right now.

So what does this all mean for us…?

Not much really, continuing to buy and hold 😁 Huge gains for April, most of which came from our US holdings VTS (in percentage terms) but the Aussie companies held their own.

We also received some dividends from A200 and VAS which is what most of the FIRE crowd are more interested in as opposed to the stock price.

A cool feature of Sharesight is the ability to quickly determine what the dividend amount per share was historically. You can do this by hovering over the little chat box icon under the “Recent Income” section in the “Holdings” tab.

Lower dividends were to be expected and tbh are going to continue for a while with the worse yet to come. We can’t shut down the world’s engine without any repercussion and dividends have always been tied more to business performance than share prices.

A200 is still maturing and I’m not sure when we will see comparable dividend yields to VAS but it’s important to note that the total return between the two funds will be similar regardless of A200 size and consequently, it’s lower dividend yield.