Hard to know where to even begin. A lot to get through.

Let’s start with what most of you guys out there will probably be interested in, and that’s the insane crash that happened in March.

Or more appropriately summed up in this pic. Here’s where we were at in the last net worth update. 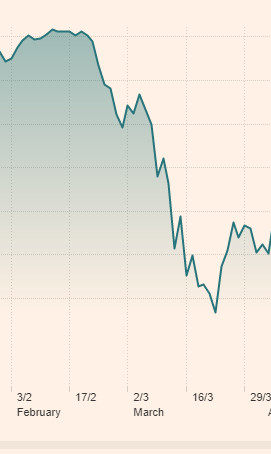 The COVID-19 crash has officially become one of the worst in history. 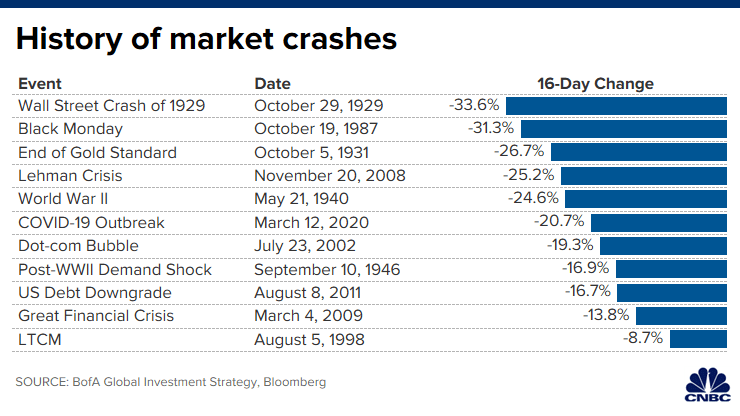 This line chart gives a better historic point of view 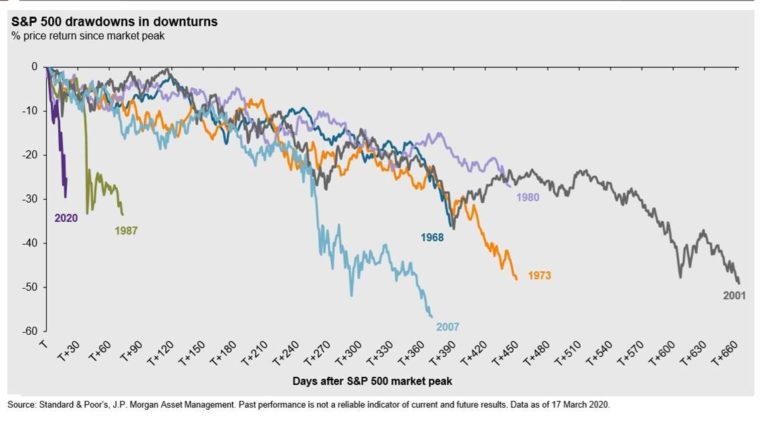 So make no mistake, we’re well and truly in bear country now.

But the thing is, from our investment strategy point of view, nothing has changed from the last update. We bought more stocks in March just like we do every single month and will continue to do throughout our lifetime. The reason I even bring up the above graphs and data is because it’s sort of hard to talk about our biggest net worth drop ever since I’ve been tracking it in 2015 without providing the context of what’s going on in the markets.

I’ve only been investing in the stock market since 2016 and in the grand scheme of things, I’m relatively new to all this stuff, which is why during the panic that swept the FIRE community in March, I reached out to someone who’s been investing throughout many crashes in history (some listed in the above graphs) to draw some wisdom and perspective. That was none other than the Aussie FIRE cult hero himself, Peter Thornhill.

You can have a listen to that podcast here but basically, Peter and I (and most others in FIRE community for that matter) share the same point of view that it’s not wise to try and predict market movements, we should stand to the side of the stampede of panic sellers trying to exit and stick to the plan.

I still think Peter’s unwavering hatred of property is a little bit extreme 😂 plus I like both ETFs and LICs but other than that, the man speaks with conviction that’s backed up by decades of experience and proven results. Hard to argue against that!

If you’re worried about this crash from an investing point of view, go listen to that pod.

It was fun to hear that Peter was also a resident of Clapham during his time in London. And yes, in typical Australian fashion, Mrs FB and I both live in Melbourne 2.0 aka Clapham in the South of London.

A big reason that I reached out to Peter to put together that podcast (in record time too I might add) was because I felt like so many people in the Australian FIRE community have never invested through a crash (myself included). So after that podcast was published I decided to start a mini-project that has been on the shelf for ~2 years now. And that’s to conduct an annual Australia FIRE survey each year just like how Stack Overflow does for developers because I suspect that the bulk of people who read this blog haven’t invested through a crash. I really enjoy reading the developer survey each year because it helps me find new technologies, what developers earn in which countries, the most popular IDE tools used by most professionals and so on. I’d love to know the most popular ETFs, LICs, side hustle strategies etc. and create a nice visual for analysis.

It’s completely anonymous and I reached out to the Facebook group for what they wanted to know beforehand. I think it will be super interesting to know where people are at and from which demographic. Like, if I’m between 29-35 from Victoria in a relationship. What are people around that same age investing in and what’s their savings rate etc. etc.

From the limited sample size, it would appear that my original suspicions were correct.

I really think the analytics that will come from this dataset will be extremely interesting!

The analysis will only be as good as the underlying data so if you’re keen to help out, please complete the anonymous survey here. 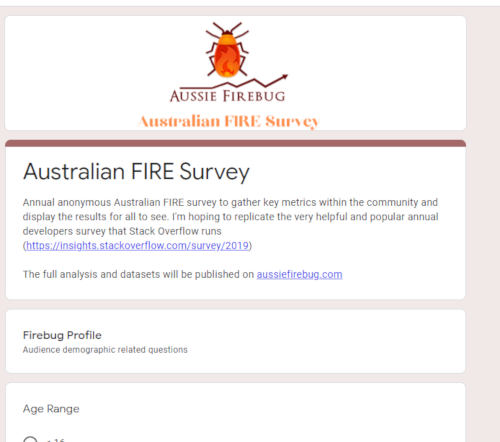 Anonymous FIRE survey for Aussies. The survey will stay open for the month of April

The results will have its own dedicated post and I’m really excited to share it with you all. Already I’m seeing super interesting submissions and trends between the dimensions.

We started off the month in Bansko, Bulgaria for a weekend of snowboarding. This was before everything went crazy.

We felt like Indiana Jones running away from impending doom and just getting out in the nick of time. 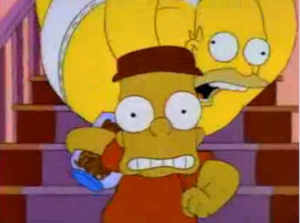 Bulgaria will be our last travelling pics for a while I think. We had plans to hit up Norway and Sweden in June but the way things are looking, that seems unlikely.

Even if things do go back to be semi-normal, the international travel restrictions will probably get us.

We can’t complain though. Both myself and Mrs. FB are healthy and doing fine which is the main thing. Mrs. FB has lost her job as a teacher but might be getting government assistance at the end of April (we shall wait and see). I’m still in a job… for now. But as a contractor, I’ll be the first to get the ass.

We had a really interesting Zoom call with the CEO the other week where basically it was an open forum where staff could submit questions and the CEO would answer them live. In a nutshell, because the insurance company where I’m working is really new, all their systems are in the cloud and they’re strategically positioned to be able to leapfrog the competition in the coming months as a lot of the archaic insurance companies in London are still running legacy systems where it’s hard to get people working from home.

It’s a really morbid thing to even talk about when there’re people dying but in a similar fashion, if you’ve got a solid job and have been sensible with money. You might be in a position to take advantage of this crash and pick up assets at a discounted price.

I’ve been looking at houses back home since the start of the year and I have no idea how much all this will have on country Victoria real estate prices but the point is that we’re in a position to capitalise on an opportunity if one presents itself. I’ve always believed that you can create your own luck to a certain degree. Luck is when preparation meets opportunity!

And other than that, it’s been a pretty boring month just working at home.

Oh, one last thing I want to mention. Since all the bike shops are shut, I’ve sorta been the local bike repairman on the block changing multiple tyres over the last week or so. And I’m using this as my excuse for the lateness of this update 😜 Holy moly, another month in the red, this time we’re down a whopping $74K 🤯.

Back to back biggest NW drop in the history of Aussie Firebug.

What can I say really?

The ups and downs are just part of the game. Although this is one mighty down at the moment. There are two silver linings in all this chaos. I’ve already spoken about the first one plenty of times before, and that’s the opportunity to buy discounted shares. But the other one is how we’re handling this historic drop mentally. And I can report that everything’s holding up strong at the minute. Me keeping my job has probably played a huge role in feeling as relaxed as we currently do even though we’ve just lost over $100K on paper during the last two months.

2020 has started the decade off with a bang that’s for sure. Interesting times ahead.

So the original plan before COVID-19 was to sell one of the IPs we still have in Queensland and use that money as a downpayment for our family home we want to purchase next year. And I just seriously started the process of getting one IP onto the market to sell. But now it looks like that plans out the window. I mean, so many people have lost their jobs and I just can’t see many people even being able to get out and see homes at the moment let alone be approved for loans to purchase in these conditions.

So it looks like the selling of our IPs has once again been put on the back burner 😞 and we’ll just have to save up the deposit between now and the end of the year. We continue Strategy 2.5 and purchased $5K worth of A200 during March at a ridiculously discounted price of just $84 per unit. This is the cheapest that A200 has ever traded for since it’s inception in May 2018! The dividends from A200 (or VAS for that matter) will 100% be lower than usual over the next 6-12 months (maybe longer). But I’m not buying these shares for the next year or two. I’m buying these shares with the intention of purchasing the income stream they will generate over the next 40-50 years!