We’re still wearing masks in indoor places but most of the things we care about (restaurants, gyms, markets etc.) have opened back up and really the only major hassle for us at the moment is the risk of having to quartine when travelling outside of the UK.

I finally was able to take a holiday in August after working at an unsustainable pace for the last 8 months 🤪 (which is the reason for the lack of podcasts this year). I managed to snag two weeks off and Mrs. FB and I ummed and ahhed about whether we wanted to risk quarantine and head overseas. We decided it was better to explore a bit of the UK instead and to aim for a Euro trip in September depending on what happens, which I felt was the right move.

So we decided to load up the playlist with bulk Taylor Swift bangers and head north.

After doing a nearly two-hour roundtrip commute for 5 years at my first job, I’d never thought I’d say that I was really looking forward to jumping back into a car to set off on a 1,500 miles road trip. There’s something different about blasting your favourite tracks on a road trip that I’d sorely missed.

We headed up north to explore some of the other cities in England and pop over to the top of Scottland visiting the following:

First off, I feel like the department of tourism for the UK has done a terrible job promoting the Lake District or I just haven’t been paying attention. I had no idea that places like this existed here. Like… what the hell England? Since when do you have stunning lakes with rolling countryside 😍

We went back to Edinburgh for a day even though we’d already been there because Mrs. FB wanted to catch up with a friend and I wanted to catch up properly with Brandon aka The Mad Fientist. I’d met Brandon briefly at the London Premier of Playing with Fire and even had him on the podcast back in 2016 but I always wanted to sit down and have a chat with the man that really inspired me to create Aussie Firebug. They say that imitation is the sincerest form of flattery and if you look closely, you can clearly see that this website and podcast is heavily inspired by Brandon’s work at the Mad Fientist.

Everybody who’s into FIRE knows who Mr Money Moustache is and a lot of people would probably say he’s their favourite FIRE blogger. But that wasn’t the case for me!

I clicked with what Brandon was writing/podcasting about a lot more because he was more related to me than Pete and the others. MMM had already retired and had kids. Brandon was still on the road towards FI and I have (and still do) an unhealthy obsession with podcasts so naturally, I gravitated towards his content the most.

This guy really played a pivotal role in the direction my life has taken and I’ve always felt like I’d like to tell him that in person. As a blogger, you might get a few extremely heartfelt emails from people explaining just how much you’ve helped them, but it’s different when you meet these people in real life.

We braved Scotland’s scorching summer heat of 19 degrees to have some street food at The NeighbourGood Market and the funny thing is we didn’t really chat about FIRE at all. It was a great experience getting to know someone you look up to and I hope he makes it down under one day.

I was so glad we made it back to Scotland to explore the highlands. The 500-mile road trip called the North Coast 500 was truly epic. I couldn’t get a good shot of the road (the below is from Google images) during the drive but it has to be one of the most beautiful and scenic trips I’ve ever done in my life. All throughout Scotland, we kept seeing this bright purple like growth throughout the giant hills and valleys. I originally thought it was a little patch of flowers or something but the stuff was everywhere! Turns out that it’s actually a gorgeous flower that’s commonly referred to as heather which enhances the already stunning views throughout the countryside.

We saw and did a lot within the two weeks but my favourite place we visited had to be the Isle of Skye!

I mean… check out some of these photos! I felt like I was in The Land Before Time or maybe Lord of The Rings.

We were absolutely blessed to have good weather for the majority of the trip too. A lot of people I’ve spoken to that have done the same trip had to fight the elements the whole time. So it’s very weather dependant unfortunately but worth seeing it either way.

I also received a super cool email in August from an extremely talented fella called Beau. Beau actually reached out to me years ago and he shot me through an update which mentioned something along the lines of an Aussie Firebug brand re-design/App he made for a project. Well, I don’t know what I was expecting but the work he did for the fan piece blew me away. It is so impressive and professional-looking, I just had to give it a shout out in the monthly update!

Beau is probably going to kill me because I had to reduce the quality of the pics but if you want to check out the whole re-brand piece, head over to his Behance Page. There’s even a little video demo showing how the app would function 🤯👏.

And if anyone is reading this thinking “HOLY CRAP THAT’S GOOD DESIGN! I need a digital designer for my business” I would more than recommend you hit up Beau on LinkedIn.

Talk about that V-shaped recovery 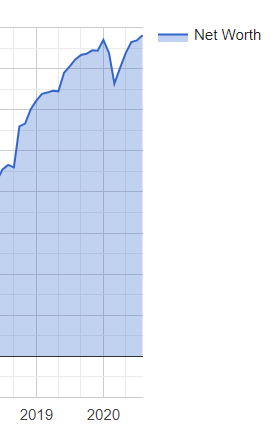 We have officially climbed our way back from the COVID bear market to reach our all-time high 🙌. I’ve probably jinxed it now (but secretly all non-retired people should hope for another crash😉) but it’s pretty crazy how quick that crash was. I’m sure all this government stimulus has lead us into a false sense of security but you have to celebrate the wins when you get em right.

If you read our last update you would know that Mrs. FB withdrew $10K from her Super last FY. She withdrew another $10K for this FY which we need to get into the markets as our cash reserves are way too high for our liking. We still might buy a house next year so part of me likes having a big fat deposit ready to go but the other half feels like all that money is just losing value in our offset (I know it isn’t but still).

So, after seeing the unexplainable real estate boom that my local town back home has witnessed throughout lockdowns I thought, “What the hell, let’s take another look at the market on the Goldie and see if the prices have picked up at all”.

I’ve had pamphlet after pamphlet delivered to my parent’s house back in Oz to ask if I’d be interested in selling. I emailed one of them saying I was looking for offers and to get a free appraisal done.

The appraisals didn’t exactly blow me away so I’m back in the camp of waiting until things improve. That could be many years away but we’re in no rush to sell. I’ll definitely be updating you all in these articles if things change here.

The markets continue to march ⬆ and we continue to DCA into it each month as per the plan. Pretty boring 🙂

One big change that was made in our portfolio during August was the sell-off of our holdings in AFI. We only had around $15K in there and the plan was to always sell it eventually to simplify our portfolio because it doesn’t really make that much of a difference to our weightings. A200 and VAS make up the bulk of our Aussie holdings and we will at some point probably sell MLT too. I was happy with the 8.1% return AFI gave us over the last ~18 months but I can’t say the same for Milton, which unfortunately is currently sitting at 1.61% 🙃. I know it’s a long term game so I think we’ll wait until MLT bounces back before we eventually sell it and get down to only 4 holdings. I think we’ll keep VAS + A200 for the foreseeable future in case VAS does lower their management fees in the future which is almost a certainty.

← Savings/Income Review 19/20 The Importance Of Increasing Your Income →