We kicked off 2022 with some travelling which almost didn’t happen.

Mrs FB and I are aspiring parents and basically, everyone has told us to get in as much travel/activities/sleep-ins as possible before a future newborn comes onto the scene (we’re not currently expecting atm). The original plan back in August last year was to get in one more overseas trip before the potential avalanche of responsibilities from parenthood hit us 😂.

It was originally going to be Japan because we missed it due to Covid in 2020. But as the months went by, the restrictions weren’t easing up enough for us to risk it plus Omicron went bananas later on in 2021. There’s was the whole ‘getting stuck’ over there risk, hotel quarantine (already paid that once 🙃) and probably the most likely risk of them all… getting a half baked Covid experience.

I’ve been thinking about what the world is going to be like after Covid for a while now because it doesn’t take a rocket scientist to know it’s not going to be the same.

Think about how much airport security changed after 9/11. A lot of the world was affected by that event. And whilst 9/11 was unprecedented, Covid is really on another level in terms of impact and severity which is saying a lot.

I mean… what sort of restrictions are going to be sticking around post-Covid? Will masks become the norm (people voluntarily wearing them)? Number restrictions on large gatherings?

I remember how much fun I had at Octoberfest back in 2019. Will that be the last Octoberfest of its kind… ever? There’ll be more festivals in the future but I’m not sure they’ll be the same. Our descendants might be able to look at photos of our generation and easily know if the picture was taken pre or post-Covid.

It’s a bizarre thing to think about really.

Anyway, back to our travel struggles…

So we axed Japan because things were getting worse, not better and I’m pretty sure Australia wasn’t even on the ‘allowed’ list to enter the country 😅.

We flirted with the idea of New Zealand but they didn’t want us either 😢.

So we ended up deciding that we’d have a look around our own backyard instead. Having never been to Western Australia, I was a bit disappointed that the borders were still closed because it was our preferred destination… oh well, next time I guess. South Australia and Tassie were next up and we were in luck with these states coming from Vic. I remember getting a slight scare in mid-December when the SA/VIC government started to mandate a combined total of 3 Covid tests before entry. It was originally 1, then it went to 2 and then 3 and I thought “Ahhh man, it’s just a matter of time before they lock us out”. Thankfully that didn’t happen and were able to cross the border to start our January holiday.

We hit up Adelaide first and I was really impressed by the city. Beautiful gardens and parks, great spots to eat and drink, plenty of recreational activities, world-class beaches just up the road and affordable housing from what I’ve heard. It’s no wonder that Adelaide always ranks highly in those ‘worlds most livable cities’ studies.

I really enjoyed hiring the orange bikes/electric scooters to see the city. Was a lot of fun. Gorgeous winery just out of Adelaide called ‘Down The Rabbit Hole’

I also caught up with Loch aka Captain Fi. 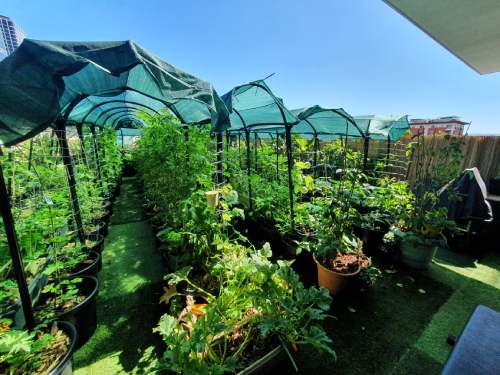 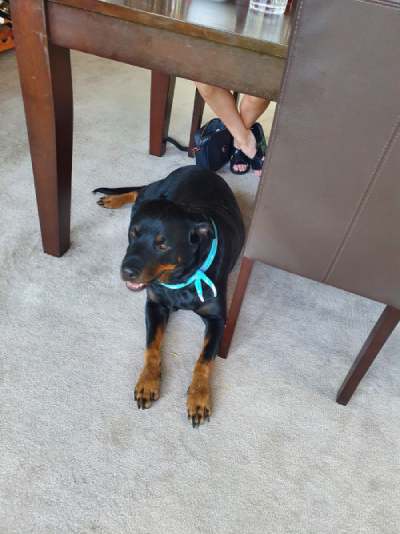 He was kind enough to help organise an impromptu FIRE meeting in Adelaide with less than 48 hours notice 😅. I think we had around 10-15 people come and go throughout the night and it was one of my highlights of January. Getting out there and meeting Aussie’s from the FIRE community has been one of my goals since returning home. Last year was hard with all the restrictions but I’m really hoping 2022 can be the year of FIRE meet-ups! I’m planning on hosting a few in Gippsland and maybe even Melbourne 🙂

A big thanks to everyone who attended the Adelaide FIRE meet-up. I’ll be back one day for sure!

We headed to Kangaroo Island (KI) next but unfortunately had caught a bout of bad weather and couldn’t do everything we had hoped. It was still a lot of fun though. Here are a few shots. 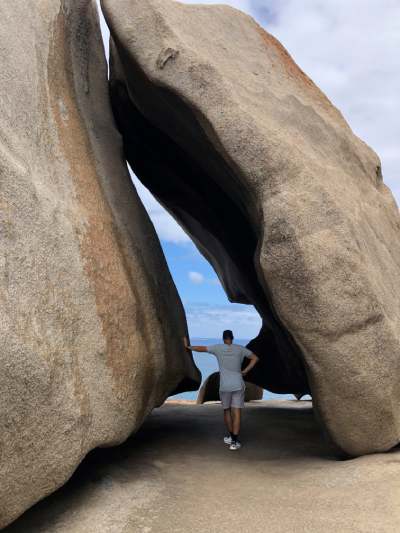 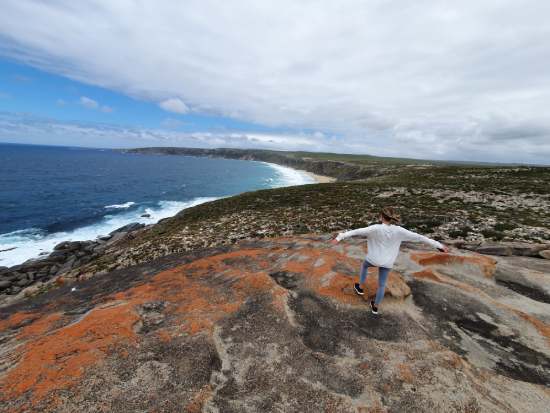 After SA we headed to Tassie to meet up with our family and do some sightseeing.

I had already been to Tassie about 7 years ago and I remember being really impressed with Hobart’s Salamanca markets and Mona museum so I didn’t mind going there again. Plus we were exploring around the island to heaps of places I hadn’t been to before anyways.

Here are a few shots. Enjoying a Frothy @ The Hanging Garden 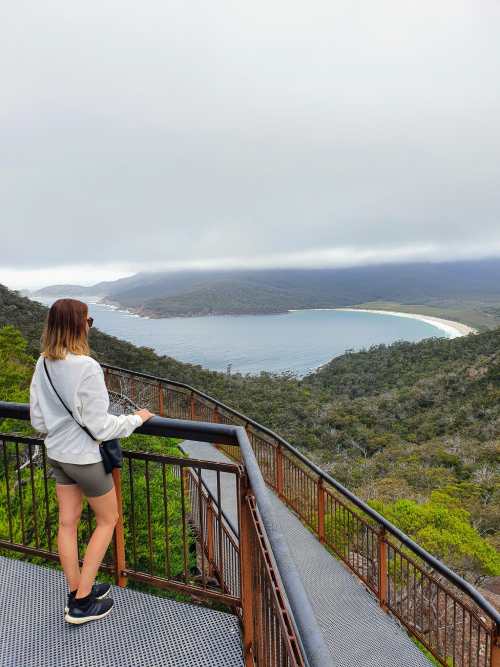 We had such a great time sightseeing around Tassie.

I also managed to have another small impromptu FIRE meet up at Preachers in Hobart. It was such a cool little bar with a great bar garden and I really enjoyed meeting more people from the community. A big thanks to everyone who came out and had a drink with us.

We got around on more of those orange scooters in Hobart which I really liked. Seeing a city on those scooters or a bike is 100 times better than driving around IMO. One of my favourite things about Hobart and Adelaide is that you can get anywhere in the city on a bike/scooter within the hour. Having lived in a bigger city like London I really appreciate the smaller size of our Australian cities. Even Melbourne and Sydney are a lot more compact compared to New York, London, Tokyo etc.

I remember being a bit shocked when we went to a friends place for drinks in London once. We punched the address into City Mapper and the designated route said it was going to take over an hour to get there 😐. That’s a crazy amount of time to get from one place to another in the same city. I still maintain that riding a bike is the quickest way to get around in London but even so, you’d have to be pretty fit for some return trips around the city and most people aren’t going to ride their bike to a party lol.

Speaking of bikes, I had no idea that the MTB scene in Tasmania was so prevalent. I’ve recently started to hit the trails with my nephews and it’s been an absolute blast! I managed to get Mrs FB on a bike and the trails at St Helen’s were awesome. I’d love to come back one day and hit up Blue Derby for sure.

After lump summing > $200K at the start of Jan, the markets started to dip and went south pretty quick with a slight recovery towards the end of the month.

This dip in the markets is the main reason for the drop in our net worth this month. Our share portfolio took a beating along with Super.

It was also a really expensive month again (inflation maybe?) and we didn’t save that much money.

Man, I forgot how much holidaying and eating out can really add up quick. A key difference these days is us having a mortgage whilst holidaying. When we were in London, we could sub-let our room before heading off on an adventure for a few weeks. But these days, it’s a double whammy of expensive accommodation plus our mortgage 💸. It’s still been worth it IMO but just reinforces my point of view that owning a PPoR is bloody expensive and can really clamp you down financially and geographically.

No changes to the FIRE portfolio.

Expenses continue to be really high for the second month in a row. This is mostly accounted for by our holidays but I’ve noticed our grocery bills have been insanely high over December and January. This is partly because I bought a new BBQ and have been hosting a lot of dinners with my mates. Playing host is super fun but can be really expensive too. Inflation has definitely had an impact on our expenses though.

I remember back in 2018 we would consistently spend around $4K – $4.5K a month for everything. It’s been hard to know what our baseline is atm because last year had so many one-off purchases (wedding, PPoR). It might take another year to see what it will look like. Will be interesting to see how this graph changes over the coming months. We didn’t make any purchases in January. We are saving a bit of extra cash in preparation for buying a new car later this year. The 2nd hand car market is still crazy and I’ll like to put it off for as long as possible but it’s something we’ll have to buy eventually.

Does anyone have any recommendations for a solid family car (SUV or wagons are preferred)? I’d love to hear about them in the comment section 🙂